Stage-and-film documentaries 2018-2022
Developed over the course of a year or longer, these projects are created with groups of people whose life stories are close-ups on the history and culture of their time. With creators and production team, a script is developed from writings, interviews, and group discussions, then sequenced to tell a bigger story of the collective experience. The result is a stage production with the participants, and a documentary film about the process. These projects provoke ideas about the future by exploring how the past became the present.

Acting Our Age
Developed by Lyndall Hare, Steve Umberger / Directed by Steve Umberger
Co-produced by Aldersgate and The Playworks Group,
Acting Our Age has developed into an annual series.
(15 month initial development, then continuing through the pandemic)


Seven people ages 73-95 relive how their stories intersected with 100 years of America's story.

"The collaboration between director and gerontologist turns decades of memories into a collective whole." Observer

A project and film about the creativity of the unhoused community

"The experience has been profoundly positive - and one that has cultivated growth socially, creatively and consciously." QC Nerve

"This is an example of how we can save the world - conversations, empathy, engagement."   Patron Rosemary Monaghan 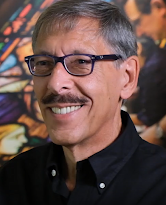 "These documentaries on stage and film give people a long time to trust each other, and you feel the depth of that commitment. The audience recognizes their own everyday lives in these real stories. The 'actors' also learn surprising things about themselves. And it's a very interesting thing to create a story arc from the collective experience of a group."
Interview for ASweatLife/Chicago ©  2019 / Photo credit: Jay Thomas, 2019
See Press