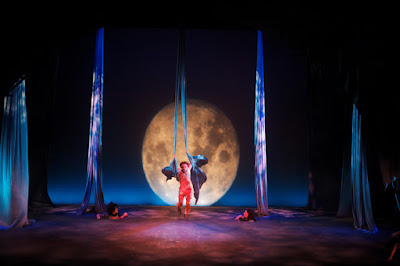 “The question isn’t whether to see it – it’s whether to see it once, twice, or every time it’s performed..It manages to be both amazingly fresh and true to tradition...Steve Umberger has pulled out all the stops and has delivered a (literally) soaring event...In every blissful way, it’s a dream come true."
News & Record (Mizell)

"Even though this production is powerfully muscular, Shakespeare's voice is not neglected. .....Lucky for you this Dream lasts more than one evening."
Enterprise (Roy)

More about the recurring Dream 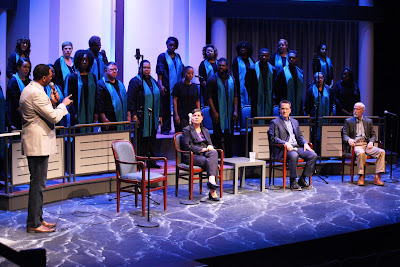 "The revitalized impact of a production like this reminds us how important a professional theatre company can be in the cultural life of a city...Can we work, pray, or even live together after we've recognized that we fundamentally disagree? ...Response from the audience during the post-performance talkback confirmed that a satisfying cross-section of people can instantly get what The Christians is saying to us now."
Broadway World (Tannenbaum)   Full review

More about the project and Playworks 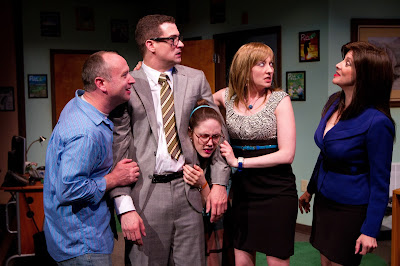 HATCHETMAN by David Wiltse
People's Light & Theatre  (Philadelphia) and Festival Stage*
﻿
"Under the sure-handed direction of Steve Umberger, the marvelous ensemble makes the difficult look easy, with its wicked sense of humor and an inventive knack for geometry...It takes office hysteria to the limit and I just loved it!...This People's Light production features a spectacular pinpoint-perfect cast...Each member of the cast has sketched his or her character perfectly; the satire is impeccable."
Philadelphia / Montgomery News (Bevilacqua)   Full review


"The cast runs like a hormonally charged, well-oiled (if loosely bolted) machine. Umberger knows when to hold 'em and when to toss 'em out, flailing."
Philadelphia Inquirer (Rosenfeld)   Full review 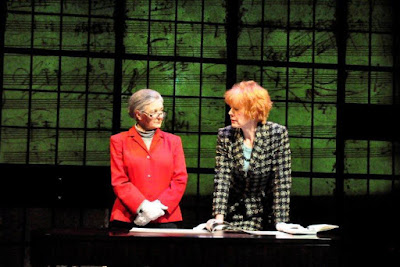 "Intellectual prowess, scholarship, and achievement provide no defense against illness and death. These are just a few of the themes that are explored with inventiveness and skill in 33 Variations. The collaboration between Festival Stage and Wake Forest is seamless...It's an unusual and beautiful show, skillfully done and not to be missed."
Winston-Salem Journal (Felder) 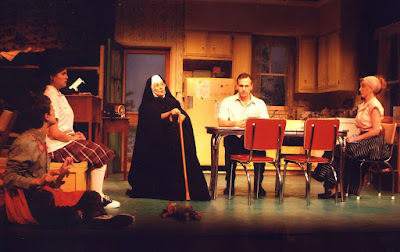 OVER THE TAVERN by Tom Dudzick
Riverside Theatre (FL)

“The first rate cast under Steve Umberger's affectionate direction captures most of the pseudo-angst lurking beneath the surface...Frank Ludwig's set design captures the middle class milieu with its apartment design, decorated for practicality, and a profusion of wallpapers...Bob Croghan's costumes are also period-perfect and full of character-rich touches."
Palm Beach Post (Erstein) 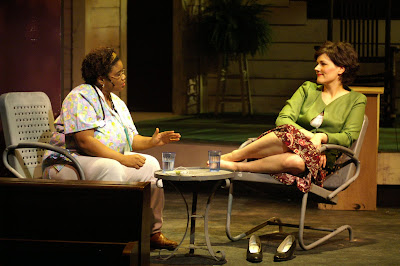 "The musical doesn't shy away from truths about old folks. It puts us inside their heads with gentle and broad wit and a tougher kind of wisdom."
Observer  (Toppmann)

“The themes about aging and family are universal.…Steve Umberger gets confident characterizations from his veteran cast….A funny and heartfelt hit, worthy of its’ creators’ estimable talents."
Raleigh News & Observer (Dicks) 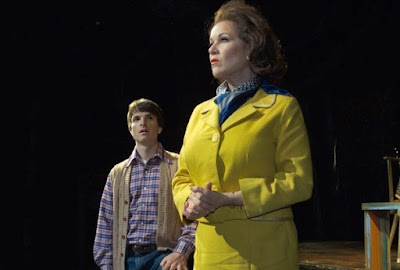 "This is first class work...Umberger's direction is wonderfully efficient. There's real artistry here, sometimes in the smallest details. The play is beautifully written, astonishingly generous in its depiction of subsidiary characters, funny, unpredictable, and conscious of the larger social and political world in which the tale unfolds. It makes other coming-of-age stories seem crude in comparison."
Tampa Bay Planet (Leib)

"It offers an intriguing perspective on a familiar story, set against the backdrop of a turbulent time for America."   Variety (Handelman)   Feature 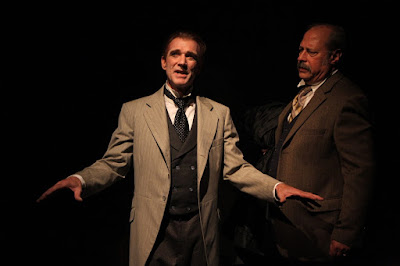 "Sherlock fans are in for a treat...Everybody's in disguise, accents and costumes proliferate, mysteries multiply, and Holmes - as proficient as Oscar Wilde at aphorisms - supplies the author with some of his best lines...All the Masterpiece Theatre stuff is terrific...All told: delish."
Philadelphia Inquirer (Zinman)

"It's an exciting show with gorgeous sets and gifted actors...Umberger shows his admiration for Holmes' history as one of the world's first modern-day superheros...The show keeps many secrets and presents many twists. Expect laughter and suspense as the mystery slowly and craftily unravels."
Philadelphia/Montgomery Media (Godshalk) 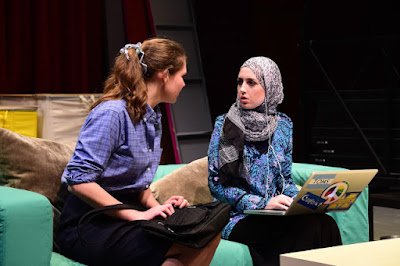 In back to back seasons, 'What You Will' was developed from production on Shakespeare's 'Twelfth Night.' Davidson Theatre's first playwright / director commission tackled the topic of identity in a world with increasingly more ways to identify.

"Shakespeare's tragedies have been the springboard for many modern dramas, but this is a giddy riff on the Bard's Twelfth Night, amid a gathering that includes a Unitarian, an agnostic, a Muslim, and an atheist...Hammond has conceived of varied faiths and sexual orientations as happening at a Deepak Chopra interfaith convention, with texting, blogging and podcasting all running amok...Best of all, the romp turns serious in the final act - just like Twelfth Night - and just when Hammond explicity references her source...I'm confident we'll be seeing this merry, vital and relevant comedy again."
Creative Loafing (Tannenbaum) 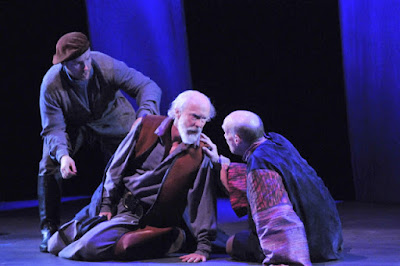 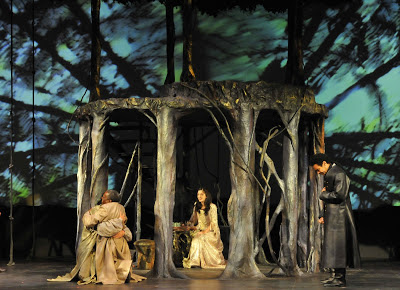 The production was developed from an earlier one at Charlotte Rep, produced with The Charlotte Symphony (using the play's complete text and the Sibelius score); part of a three year collaboration combining the work of four performing arts companies


"The sumptuous production is a fantastic amalgam of light, dance, and live symphony music...From atop a cunning yet minimal set, a majestic Prospero commands an uncanny 12-person Ariel, whose delightful choreography makes the spirit seem literally everywhere at once."
Backstage (Woods) 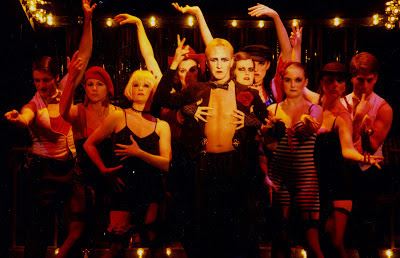 "Umberger and his ingenious design team frame Cliff's fall from innocence as a series of vignettes no less striking than archival photographs of the period...We never forget that we're seeing this decadent Berlin circa 1930 through Cliff's eyes...The concept informs everything about this thoughtfully conceived, beautifully executed revival, from the viewfinder-like set to the cinematic lighting...Umberger's fluid transitions from one world to the other not only keep the show moving; they show us how easily an entire nation's perception of fantasy and reality can become blurred. This is the central premise of Cabaret, and the production nails it."
Observer (Coppens)

"Thanks to the cinematic pacing, connections between the Kit Kat songs and the preceding action snap together with a satisfying click...Scenes between Cliff and Sally now work so easily Umberger seems to be unlocking their true intent."
Creative Loafing (Tannenbaum)

ROMEO AND JULIET by William Shakespeare 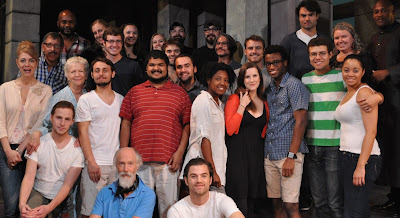 N.C. Shakespeare Festival; and a collaboration with design and literary staff of Univ. of N.C. School of the Arts, Wake Forest University, High Point University, Winston-Salem State University and University of N.C. Greensboro

"Timeless and timely...The multicultural cast reflects the world we live in today, with a full spectrum of age and culture. Although Shakespeare's language remains intact, Umberger hasn't set the play in Elizabethan times or any specific period. The set and costumes use elements of classical and contemporary to create a world that feels immediate for us. Fred Story's original score uses solely exotic bells, and Mark Pirolo's towering set is on a thrust that juts into the audience."
News & Record (DeCwikiel-Kane)   Playbill advance 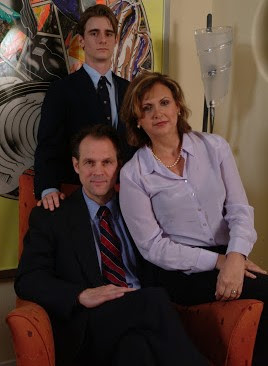 THE GOAT, OR WHO IS SYLVIA? by Edward Albee
Florida Studio Theatre
Inaugural production of FST's third theatre space and Stage lll series

"If The Goat stimulates all these thoughts /about society's rules/ it's because the production is first-class in every particular...Umberger's direction underlines the strong emotions of all four characters., and Marcella Beckwith's set, of a modern, upscale living room, couldn't be more felicitous..This is a play with little action but the production keeps us riveted all the way."
Tampa Bay Planet (Leib)   Full review